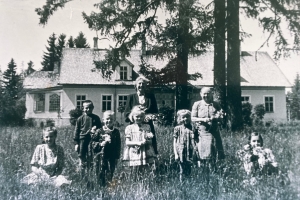 After the Agrarian Reform (in 1920), into the State Land Fund there was credited Oleri Manor land along with two half-manors with the total area of 872 hectares. They were divided into 77 units, but in the Manor house there was established a four grade school (from 1922). The school also operated in the Soviet regime years (until 1962), then reorganized into a special school for mentally challenged children (up to mid-70-ies).

On the picture - Oleri 1st grade elementary school of Jeri Civil Parish around 1950.