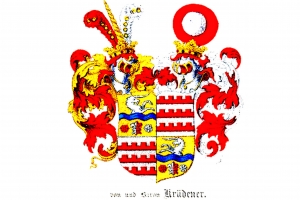 Oleri Manor (1836) from Johann Anton von Engelhardt, purchasing it together with a part of his debt, took over baron Carl Theodor von Krüdener. Around 1840 there began to take shape Oleri village. Baron, promising land for the construction of houses and farming, attracted a variety of craftsmen arriving from Germany - bricklayers, blacksmiths roofers, potters, tanners, cobblers. Along with small houses, people of Oleri got also their pub and windmill. Dividing the legacy of baron von Krüdener (in 1864) Ohlershof was passed to the eldest son - Carl Magnus von Krüdener, but after a few years because of the debts the manor was purchased by the youngest son Woldemar Gustav von Krüdener.

The dwelling Master House of Oleri Manor was built thoroughly of stones. With Dutch tile roof, 14 residential and 6 roof rooms, kitchen. A romantic mood to the building was granted by windows with large panes. Not far from the main house there was located a smaller house for the manager, barn, greenhouse, ice cellar, stables, servants' apartment. The spacious complex of the manor farm consisted of another three half-manors, two Dutch-style windmills. There operated a tar trickler and brick kiln, but (in 1887) there started operating Oleri beer brewery.

In 1898 as a gift for his 20th birthday Voldemar Gustav von Krüdener gave Oleri Manor to his son Edgar von Krüdener, his wife was Hella von Krüdener, born Mensenkampf. The farm developed and already in 1913 Edgar von Krüdener purchased a rich Rindzele Manor in Kurzeme from Riga Mayor George Armitsted. Thereto family travelled in summer during lily flowering time. Edgar von Krüdener was the first car owner in Rujiena area. It's nothing that it was a simple model with a wooden cart and looked more like a postal carriage! Baron was a passionate hunter. In the Baltic States there were seven large flocks of hunting dogs and one of them belonged to Edgar von Krüdener in Oleri Manor.

On the Picture there are beagles of Edgar von Krüdener in hunting – the painting of baron Alexander Ferzen.

On the Picture there are beagles of Edgar von Krüdener in hunting – the painting of baron Alexander Ferzen.